How Zero Co is helping eliminate single-use plastics at home

Mike Smith's knack for entrepreneurship has seen him notch up a number of successful endeavours over the years. From wearable technology to track-and-monitor surfing activity to producing wine and building schools in Myanmar, his resume – to say the least – is pretty impressive.

As the mastermind behind Zero Co, Smith is setting his sights on closing the loop on the single-use plastic problem. His new sustainability start-up produces a range of environmentally friendly cleaning and personal care products, as well as reusable sachets made from recycled ocean plastic, to do just that. 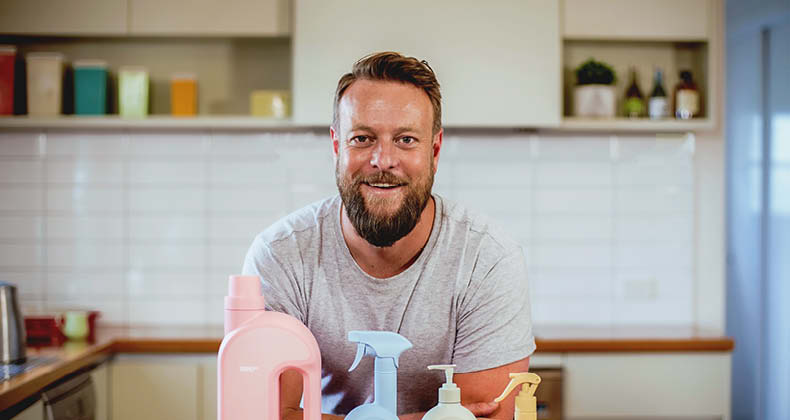 In Australia alone more than 3.5 million tonnes of plastic was consumed across the country  between 2016 and 2017 – of which less than 10 per cent was recycled. According to the World Wildlife Fund, the average Australian uses 130 kilograms of plastic per year and, alarmingly, up to 130,000 tonnes of plastic finds its way into our waterways and the ocean.

It was during an 18-month hiking and trekking trip with his wife Alyssa to some of the world's most far-flung destinations, such as the top of the Himalayas and the Afghanistan border, that the idea for the sustainability start-up first came to Smith.

"I was blown away by the amount of plastic that found its way to the most remote places on Earth," he says.

Distraught by the reality of the single-use plastic problem, Smith says he decided then and there "to try and do something about it”.

Armed with this alarming information, Smith set out to create a world-first business that could get single-use plastics down to zero use in kitchens, bathrooms and laundries.

Moving back in with his parents in Byron Bay to save money, Smith threw in $100,000 of his own savings to get things off the ground. Leaning on his past experience raising capital, he was able to secure $600,000 in a pre-seed funding round. However, if he was to succeed on his mission, Smith would need even more investment.

Despite never having run a crowdfunding campaign, Smith launched his first-ever Kickstarter in October 2019 with a goal to raise $251,313 to help fund Zero Co's first production run. The results surprised even him. An instant hit, his idea spoke to some 7,000 backers, raising nearly $750,000 in four short weeks – and making it the most funded Kickstarter in Australia in 2019.

When asked why he thinks it was so successful, aside from luck and it being "the right idea at the right time", Smith credits the ABC-TV documentary War on Wastewith alerting Australians to the problem.

"It was one of the highest-rated TV shows in Australia last year, so there was heaps of awareness about single-use plastic in people’s homes at the time. And then we came out and said, 'Hey, here's a solution that can get rid of all the single-use plastic from your kitchen, laundry and bathroom’.”

Making everything from hand and body wash through to laundry liquid, shower cleaner and toilet cleaner, air freshener and everything in between, Zero Co tackles the global plastic problem at both ends of the supply chain. It stops the production of new plastic while using recycled-ocean plastic as the raw material.

Customers can choose from a variety of starter kits, combos, refill pouches and refillable dispensers, which are then delivered in one to three business days. Once empty, the pouches are then sent back where they are refilled and returned, creating a zero-use plastic environment in the home.

Mike is now gearing up to dispatch 10,000 pre-orders from October 2020. While he’ll have no trouble fulfilling those orders, the company expects to reach a point where it will be refilling one million pouches at a time. To do that, it will need a unique piece of machinery to keep up with the demand.

While they've already begun building this bespoke piece of equipment, Smith is hoping the St. George Kick Start 2020 Program will give Zero Co the little boost it needs to make it happen. If they take out one of the top two awards, he’ll put the prize money towards seeing the machine's completion.

"We've developed a bunch of intellectual property around this part of the business and we're building this world-first piece of equipment that is going to automate that process. If we win the Kick Start Program, the money will go to finishing off that project," says Smith.

He adds: "If we nail this machine and we can work out how to clean and refill a type of packaging for cheaper than it costs to produce a new one, then that's the holy grail of the circular economy."

The world is facing a monumental single-use plastic problem. Zero Co is the first truly closed-loop FMCG brand that tackles it at both ends of the supply chain by stopping the need for the production of new plastic while also cleaning up our oceans, one bathroom, kitchen and laundry cabinet at a time.

Zero Co is a Kick Start 2020 finalist. To learn more about other finalists in this category, visit the St. George Kick Start hub.